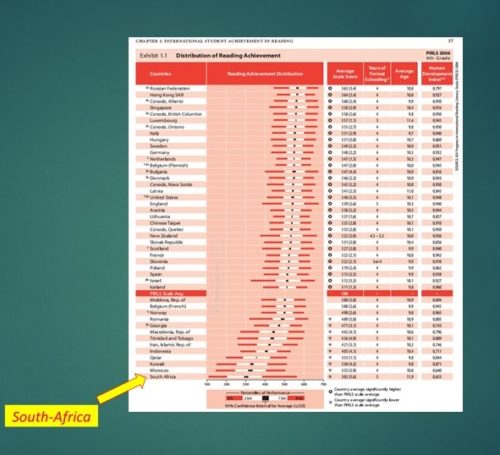 Although no academic skill is more vital than the ability to read (Logan, Medford & Hughes, 2011), the reality is that many children battle to learn to read, and some never succeed. Judging by the Progress in International Reading Literacy Study (PIRLS) results, South African children are especially affected.

PIRLS is an international comparative survey of reading literacy of Grade 4 and Grade 8 learners in participating countries. South Africa has so far only taken part in the Grade 4 tests, but due to a concern that Grade 4 is a transition phase South African Grade 5 learners were also included in the surveys. Of the 45 countries that participated in PIRLS 2006 — which included other middle-income countries such as Morocco, Iran, Trinidad and Tobago, Indonesia, and Macedonia — South African Grade 5 learners achieved the lowest score. Only 13% of Grade 4 and 22% of Grade 5 reached the Low International Benchmark of 400/1000. In stark contrast, 94% of learners in half of the participating countries reached this Low International Benchmark (Spaull, 2013). Trong (2010, p. 2) elucidates the practical value of this benchmark: “Learners who were not able to demonstrate even the basic reading skills of the Low International Benchmark by the fourth grade were considered at serious risk of not learning how to read.” If Trong’s framework is to be accepted, 87% of Grade 4 and 78% of Grade 5 South African learners were be at serious risk of not learning to read.

In 2011, in response to the incredibly weak performance of South African learners in PIRLS 2006, South Africa opted to let Grade 4 learners take part in prePIRLS. In PIRLS it is assumed that most Grade 4 learners are transitioning from “learning to read” to “reading to learn.” By contrast, prePIRLS is “a less difficult assessment, intended to measure the reading comprehension skills of learners who are still in the process of learning how to read” (Howie and van Staden, 2012, as cited by Spaull, 2013). Because prePIRLS and PIRLS are not comparable, and because of the questionable decision to test only a sub-sample of Grade 5 learners in PIRLS 2011, it was unfortunately not possible to draw any meaningful conclusions about the reading proficiency of South African primary school children between 2006 and 2011 using this data (Spaull, 2013). In PIRLS 2016 South Africa again chose to let Grade 4 learners take the less difficult PIRLS assessment, and only sub-populations of Grade 5 learners took part in PIRLS as benchmarking participants. As before, South Africa’s Grade 5s achieved the lowest score — an average of 95 points lower than Denmark’s Grade 3s (Howie et al., 2018).