Babies’ First Words Can Be Predicted Based on Visual Attention 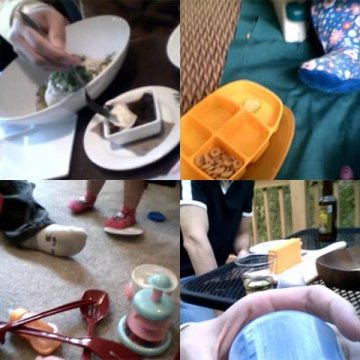 Indiana University psychologists have shown that a baby’s most likely first words are based upon their visual experience, laying the foundation for a new theory of infant language learning.

The findings also suggest new possibilities for the treatment of children with language deficits and autism.

Drawing on theories of statistical learning, IU researcher Linda Smith and colleagues found that the number of times an object enters an infant’s field of vision “tips the scales” in favour of associating certain words with certain objects.

The research appears in the journal of the Royal Society Philosophical Transactions B in a special issue on statistical learning.

“We think that children’s first words are predictable based on their visual experience with objects and the prevalence of those objects in their visual world,” said Smith, a professor in the IU Bloomington College of Arts and Sciences’ Department of Psychological and Brain Sciences and senior author on the study.

Visual memory may be key

“Visual memory may be the initial key to getting words stuck on objects — familiar visual objects like table, shirt, bottle or spoon,” she added. “It’s an aggregated experience; those very first words may be learned — slowly and incrementally — for a few visually pervasive objects. This may be how infants begin to break into language before their first birthday.”

The study’s results could also help inform interventions for children with delayed speech and other language disorders.

Although many researchers have studied infants’ first words to understand learning, Smith said none have approached the question from the visual side.

“While studying language acquisition from the ‘word side’ may benefit those studying later stages of language learning — at the ages of 18 months to 3 years — it cannot account for how children break into language,” she said.

Under the new theory, which Smith and colleagues call the Pervasiveness Hypothesis, a few highly prevalent objects stand out to infants among the “clutter” of other less frequent objects to become their first words.

To conduct their study, IU researchers looked at videos that showed the visual field of eight children — five girls and three boys — between 8 and 10 months old, the period before children engage in verbal interactions with parents and caregivers.

The videos came from head-mounted cameras worn by the children an average of 4.4 hours. Caregivers were told the cameras would observe children’s daily activities, not words or objects specifically. Caregivers could choose when to activate the camera.

For the purpose of the study, researchers observed mealtime scenes, defined as any eating by anyone at any time or location — in cars, at playtime or in a high chair, for example. The recordings yielded 917,207 mealtime frames, with one image sampled every five seconds. Five objects were recorded for each frame: a total of 745 objects.

The study’s results revealed a strong correlation between the most frequently appearing objects and “first nouns,” with the top 15 of these words appearing in the images collected by the study.

“The comparison of first and early nouns was particularly striking, since both sets of object names are acquired quite early in childhood and refer to objects common in households with infants,” said Elizabeth Clerkin, a Ph.D. student in the IU Bloomington Department of Psychological and Brain Sciences and first author on the study.

“That infants’ visual environment during mealtime consistently involves a very small number of objects — and the names of these high-frequency objects are among those normally learned first by infants — suggests visual experience is doing the heavy lifting in very early word learning,” she added.

Whether children who experience speech disorders are not picking up visual regularities in the environment or simply live in households with fewer regularities, Smith said it’s vital to explore the role of both words and vision in language learning.

“Taking account of the visual brings a whole new dimension of word-learning into view,” she added. “If all you ever worry about is the word side of word-learning, you may be missing half the problem: visual cues that aid language learning.”