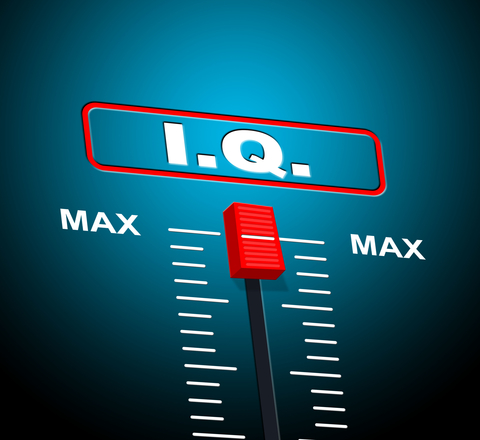 IQ stands for intelligence quotient. Supposedly, it is a score that tells one how “bright” a person is compared to other people. And — also supposedly — the score is an indication of the person’s potential. The average IQ is by definition 100; scores above 100 indicate a higher than average IQ and scores below 100 indicate a lower than average IQ. Half of the population has IQ’s of between 90 and 110. If an IQ test is supposed to measure a person’s intelligence, the question is: What is intelligence? Is it the ability to do well in school? Is it the ability to read well and spell correctly? Or are the following people intelligent?

The problem is that the term intelligence has never been defined adequately and therefore nobody knows what an IQ test is supposed to measure. Already in the early 1920s the journalist Walter Lippmann maintained that IQ tests were nothing but a series of stunts. “We cannot measure intelligence when we have not defined it,” he said.

Jean Piaget, the father of cognitive development, was opposed to defining intelligence in terms of the number of items answered correctly on a so-called intelligence test. Intelligence is a complex term in Piaget’s theory, but in general he said that intelligence is always related to an organism’s adaptation to its environment. Piaget emphasised the dynamic nature of intelligence and how it qualitatively changes.

According to most current definitions — although they are not conclusive — intelligence is made up of the skills of logical reasoning, problem solving, critical thinking, and adaptation. This scenario seems reasonable, says Professor Linda S. Siegel at the University of British Columbia, until one examines the content of IQ tests. The definition of IQ, as is operationalised in all IQ tests, includes virtually no skills that can be identified in terms of the definitions of intelligence. To support her statement, Siegel gives a detailed analysis of the subtests of the Wechsler Intelligence Scale for Children-Revised (WISC-R). This IQ test is composed of Verbal and Performance sections. In each subtest of the Verbal scale, performance is in varying degrees dependent on specific knowledge, vocabulary, expressive language and memory skills, while in the Performance scale, visual-spatial abilities, fine motor coordination, perceptual skills, and in some subtests speed, are essential for scoring. Siegel also points out that IQ tests measure, for the most part, what a person has learned, not what he or she is capable of doing in the future (his potential).

Add to the definition problem the fact that IQ tests are not very reliable, and it is understandable why IQ tests have been the focus of criticism for many years. The scores may vary as much as 15 points from one test to another, while emotional tension, anxiety, and unfamiliarity with the testing process can greatly affect test performance. In addition, Gould described the biasing effect that tester attitudes, qualifications, and instructions can have on testing. In spite of this the futures of thousands of children are determined by the results of this test.

In 1962 Banesh Hoffman told a shocked America about the “tyranny of testing” in his classic book of the same name. His book and others that followed stirred up much controversy, leading the National Education Association in 1976 to recommend the elimination of group standardized intelligence, aptitude, and achievement tests. Sarason quotes an advertisement that was placed by Psychology Today in the New York Times in August 1979, part of which appears below:

The National Education Association, with membership of almost 2 million teachers, has called for the abolition of standardized intelligence tests because they are “at best wasteful, and at worst, destructive.”

Yale psychologist Robert Sternberg says in P.T. that psychologists know “almost nothing about what it is that they have been measuring. The tests have proved overall to have only low to moderate power to predict such things as future job performance, income and status, or overall happiness and adjustment.”

However, the dust soon settled after this uprising and the testing industry became more powerful than ever. The National Education Association has completely changed its stand and now “recognizes the need for periodic comprehensive testing for evaluation and diagnosis of student progress.” This is no wonder, says Dr. Thomas Armstrong, since it would have taken a major miracle to eliminate testing.

Intelligence is an encompassing term

Whether one agrees with the application of IQ tests or not, it is doubtful that there is such a thing as general intelligence. Intelligence is an encompassing term. Many people feel that intelligence includes such attributes as creativity, persistent curiosity, and success. Consider, for example, that James Watson, the discoverer of DNA, has an IQ of about 115 — about the IQ of most college students. He claims that his great success was due to his persistent curiosity, something not measured by IQ tests. IQ tests, however, are poor indicators of many attributes of this nature. Generally, IQ tests seem to measure common skills and abilities, most of which are acquired in school. Thus, in opposition to the idea of a general intelligence, the concept of “multiple intelligences” came into being.

Undoubtedly, the man who stands out from the crowd for formally introducing the idea of multiple intelligences was L.L. Thurstone (1887-1955). Thurstone was a mathematician who had been hired to work in Thomas Edison’s laboratory. Thurstone soon became aware that Edison seemed completely unable to comprehend mathematics. This led Thurstone to conclude that, rather than a single quality called general intelligence, there must be many kinds of intelligence, perhaps each unrelated to the other. Thurstone believed that if a person was intelligent in one area it didn’t necessarily mean that he would be intelligent in another. One of Thurstone’s goals was to isolate social from nonsocial intelligence, academic from nonacademic intelligence, and mechanical from abstract intelligence. 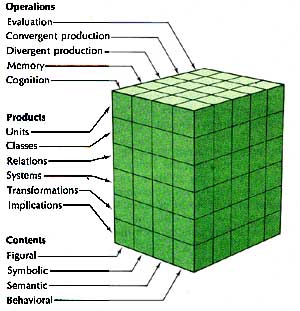 Based on his factor analysis of the human intellect, J. P. Guilford developed a model of intelligence. Guilford’s structure of the intellect is shown to the right. The figure is shown in three dimensions. Each side of the block represents a major intellectual function. Each function is divided into sub-functions. The total number of interactions possible is 120, since Guildford had isolated 120 different kinds of intelligence.

Probably the best-known theory of multiple intelligences was developed in 1983 by Dr. Howard Gardner, professor of education at Harvard University. Dr. Gardner proposes eight different intelligences to account for a broader range of human potential in children and adults. These intelligences are:

In one study two researchers, Feldman and Bratton, went to a suburban Minneapolis school and administered the 18 most common measures used throughout the United States to define giftedness to all of the children in each Grade 5 grade class. Among the 18 measures used to define giftedness were high IQ scores, high scholastic grades, high scores on the Primary Mental Abilities Test, and high teacher ratings. Feldman and Bratton labelled the top five students on each measure “gifted.” Surprisingly, no student was found to be in the top five on every measure. More strikingly, 92 percent of the children in Grade 5 had the potential of being labelled gifted by a measure popularly used to define giftedness!

Curiosity is the genesis (Mother) of intelligence. A knowledgeable teacher can and should use techniques to spark the Dormant Curiosities in students so that they BECOME persistently curious about anything or everything. Curiosity is THE THING for people with normal talents and abilities. Wake it up and you’ll have a person who will henceforth acquire an impressive fund of knowledge (sometimes on their own) as curiosity asserts itself to become THE driving force behind the willful acquisition of knowledge and information. This force makes all the difference. This does not in any way try to invalidate IQ or the bell… Read more »