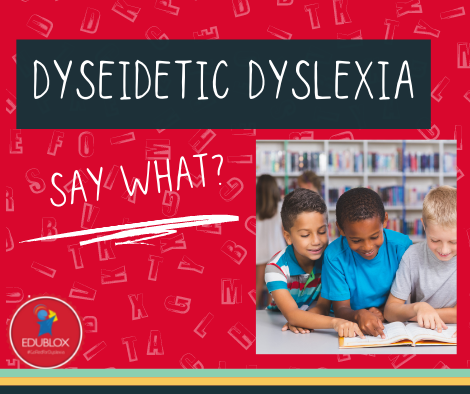 I bo not wont to do to shool eny more becouse the children ar lafing at me. I canot reed pleese help me

David is not slow at learning. In fact, according to the evaluations of a few professionals, he is rather intelligent. Yet, he certainly has a problem, and he shares his problem with millions of other children and adults. David has dyslexia.

The term “dyslexia” was introduced in 1884 by the German ophthalmologist Berlin. He coined it from the Greek words dys meaning ill or difficult and lexis meaning word, and used it to describe a specific disturbance of reading in the absence of pathological conditions in the visual organs. In a later publication, in 1887, Berlin stated that dyslexia, “presuming right-handedness,” is caused by a left-sided cerebral lesion. He spoke of “word-blindness” and detailed his observations with six patients with brain lesions who had full command over verbal communications but had lost the ability to read.

In the century that followed, the narrow definition Berlin had attached to the term dyslexia would broaden. Today the term dyslexia is frequently used to refer to a “normal” child — or adult — who seems much brighter than what his reading and written work would suggest. While the term is mostly used to describe a severe reading problem, there has been little agreement in the literature, or in practice, concerning the definition of severe or the specific distinguishing characteristics that differentiate dyslexia from other reading problems.

The terms dyseidetic and dysphonetic are generally used to describe two main types of dyslexia.

The prominent characteristic of dyseidetic dyslexia, also called visual dyslexia, is the inability to revisualise the gestalt of the word. Usually, the child has little difficulty spelling words which may be long but are phonetically regular. It is the small but irregular non-phonetic words, such as what, the, talk, does, that create the greatest difficulty for this child.

• Confusion with letters that differ in orientation (b-d, p-q).

• Confusion with words that can be dynamically reversed (was-saw).

• Very limited sight vocabulary; few words are instantly recognized from their whole configuration — they need to be sounded out laboriously, as though being seen for the first time.

• Losing the place because one doesn’t instantly recognise what had already been read, as when switching one’s gaze from the right side of one line to the left side of the next line.

• Omitting letters and words because they weren’t visually noted.

• Masking the image of one letter, by moving the eye too rapidly to the subsequent letter, may result in omission of the first letter.

• Difficulty learning irregular words that can’t be sounded out (for example, sight).

• Difficulty with rapid retrieval of words due to visual retrieval weaknesses.

• Visual stimuli in reading prove so confusing that it is easier for the child to learn to read by first spelling the words orally and then putting them in print.

• Insertions, omissions, and substitutions, if the meaning of the passage is guiding reading.

• Strengths in left hemisphere language-processing, analytical and sequential abilities, and detail analysis; can laboriously sound out phonetically regular words even up to grade level.

• Difficulty recalling the shape of a letter when writing.

• Can spell difficult phonetic words but not simple irregular words.

Dysphonetic dyslexia, on the other hand, is associated with auditory-processing difficulties. These children have difficulty remembering letter sounds, analysing the individual sounds in words, and sequencing/blending these into words.

• Difficulty processing rapid auditory inputs so that consonant sounds that cannot be sustained (p-b) are not perceived; these may then be omitted in reading.

• Poor ability to analyse the sequence of sounds and syllables in words; consequently they become reversed in reading words; this is akin to the problem faced orally when poor auditory analysis has taught the child such phrases as “lead a snot into temptation” and “Harold be Thy name” in the Lord’s prayer, or “lmnop” being one lumped cluster in the alphabet song.

• Poor ability to remember individual sounds or sequences of sounds.

• Difficulty listening to words and omitting one sound and substituting it for another (say cat; now take off the /c/ and put on an /f/); such abilities are essential for word analysis because that is what figuring out how to phonetically decode a word is all about; children usually develop this skill with initial consonants, and then medial vowels or consonants.

• Inability to rapidly retrieve letter sounds while analysing words, so that the beginning of the word is forgotten by the time the last letter of the word is recalled (naming problem).

• Difficulty applying the phonetic rules from words that can be read to pseudowords that follow the same pattern but are not real words.

• Word substitutions that are conceptually (person, human) or visually (horse, house) related, but not phonetically related.

• Limited sight vocabulary because the student cannot memorise an abundance of words without the benefit of phonetic cues.

• Guessing at unfamiliar words rather than employing word-analysis skills.

• Spelling remains below reading level because it is attempted by sight rather than by ear.

• Correct spellings occur primarily on words that the child has encountered repeatedly and therefore can revisualize.

• Bizarre spellings that seldom can be identified, even by the child, because they do not follow phonetic patterns.

Greetings
I have a Dyslexic child where can I get a school in Pretoria where he can be assisted.he is presently in a normal school.loosing his self esteem due to not being able to read and spell.

Dear Sophia, there *is* help for dyslexia. Kindly contact an Edublox clinic for an assessment and help: http://www.edubloxsa.co.za/contact-us/