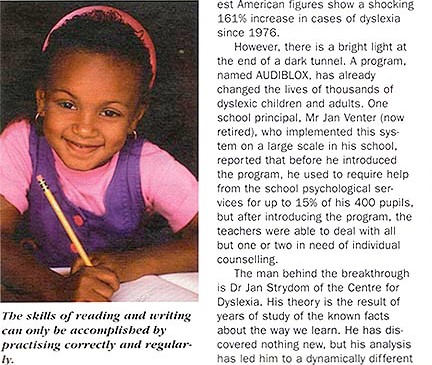 This article was published in New Horizons, a magazine for Old Mutual policyholders, in the early 90’s:

Reversing words, writing letters back to front, not being able to remember the sequence of letters in a word or sometimes reading from right to left ― dyslexia is a frustrating and often embarrassing problem in our world of high-tech communications.

When in the fifties, the term “dyslexia” came to be widely used to describe normal children who had learning disabilities akin to those who suffered brain damage, it was seized on with relief by parents and teachers alike. The idea that there was a physical syndrome called dyslexia, and that it was only a matter of time before its cause could be isolated and a fix-it drug developed, seemed soothingly feasible.

The nineties have brought a rethink. Despite a profusion of research projects, the involvement of professionals in every sector, an array of tests and remedial materials, pharmaceutical intervention and specialist schools, dyslexia is still looked upon as incurable: “Dyslexia is like alcoholism … it can never be cured” is the saying of one of the scholars in the field. And while scientists still argue on how to define it, what causes it and how to deal with it, the number of so-called dyslexics is rising. Described as “learning disabled”, latest American figures show a shocking 161% increase in cases of dyslexia since 1976.

However, there is a bright light at the end of a dark tunnel. A programme, named AUDIBLOX, has already changed the lives of thousands of dyslexic children and adults. One school principal, Mr Jan Venter (now retired), who implemented this system on a large scale in his school, reported that before he introduced the programme, he used to require help from the school psychological services for up to 15% of his 400 pupils, but after introducing the programme, the teachers were able to deal with all but one or two in need of individual counselling.

The man behind the breakthrough is Dr Jan Strydom of the Centre for Dyslexia. His theory is the result of years of study of the known facts about the way we learn. He has discovered nothing new, but his analysis has led him to a dynamically different view on the true nature of dyslexia.

According to his view, human learning does not take place on a single level, but is a stratified process. A human being, therefore, cannot be taught to master any skill unless the foundation of that particular skill has been mastered first.

One way to explain the importance of this principle is to compare it with a sport. The game of soccer, for example, is supported by certain subskills or foundational skills, such as passing, controlling, heading, dribbling and shooting the ball. Before any person is expected to be a soccer player ― especially a good soccer player ― he is first trained in these various subskills or foundational skills. A person who has not been taught, is bound to be a failure on the soccer field. The only way in which this preparation can be accomplished, is by practising these subskills correctly and regularly.

The “game” of reading, just like the game of soccer, is also supported by certain subskills. However, very little ― if any ― is ever done to prepare learners for the reading “game”. We expect children to learn to read and write between first and third grade, to master subject matter in the higher grades, and of illiterate adults to pass literacy courses while we as educators have done little ― if any ― to first prepare them. At present, many people are being deprived of a brighter future, simply because we do not follow these logical principles in the learning situation, although they are ― very successfully ― put to practice in sport every day.

That then, is what AUDIBLOX is all about. It is a program that exercises the subskills or foundational skills of reading through correct and regular practice. Thereafter, reading can be taught successfully.

Through AUDIBLOX, a new horizon for dyslexia has been opened.