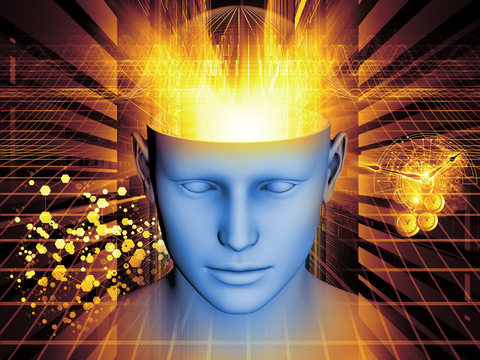 Dyslexic children use nearly five times the brain area as normal children while performing a simple language task, according to a new study by an interdisciplinary team of University of Washington researchers.

The UW researchers, headed by developmental neuropsychologist Virginia Berninger and neurophysicist Todd Richards, used a novel non-invasive technique called proton echo-planar spectroscopic imaging (PEPSI) to explore the metabolic brain activity of six dyslexic and seven non-dyslexic boys during oral language tasks. The researchers used PEPSI to measure levels of brain lactate activation. Lactate is a by-product of energy metabolism produced by neurons when the brain is activated. Most, but not all, of this brain activity took place in the left anterior, or frontal, lobe of the brain, which is known to be one of the centres for expressive language function.

“The dyslexics were using 4.6 times as much area of the brain to do the same language task as the controls,” said Richards, a professor of radiology. “This means their brains were working a lot harder and using more energy than the normal children.”

To capture the brain activity of the subjects, the UW research team used PEPSI, which is about 32 times faster than conventional magnetic resonance spectroscopy. Software developed at the UW enabled the researchers to detect specific brain chemicals.

The 13 boys in the study were between 8 and 13 years of age and the dyslexic and control groups were well-matched in age, IQ and head size, but not in reading skills. The controls were reading at a level above normal for their age and had a history of learning to read easily. The dyslexics had delayed reading skills and were reading well below average for their age. Their families also had a history of multi-generational dyslexia that was confirmed in a concurrent family genetics study.

The boys, fitted with earphones were asked to perform four tasks while their brains were being imaged. Three of the tests involved pairs of words and the fourth used pairs of musical tones.

In the language tests, the boys heard a series of word pairs that consisted of either two non-rhyming words such as “fly” and “church,” two rhyming words such as “fly” and “eye,” a non-rhyming real word and non-word such as “crow” and “treel,” and a rhyming word and non-word such as “meal” and “treel.” The boys were asked if the word pairs rhymed or didn’t rhyme and if the pairs contained two real words or one real and one non-word. They responded by raising a hand to indicate yes or no. In the music test, the boys heard pairs of notes and raised one hand if they thought the notes were identical and the other if they believed them to be different.

While the dyslexic boys exhibited nearly five times more brain lactate activation during a language task that asked them to interpret the sounds of words, there was no difference in the two groups during the musical tone test. This means the difference between the dyslexics and the normal children relates to auditory language and not to non-linguistic auditory function, according to Richards and Berninger.

One could easily assume that this study confirms the theory that dyslexia is a brain-based disorder. There are, however, alternative explanations for the cause of dyslexia as well as the research findings:

It is important to note that human learning does not take place on a single level, but is a stratified process. Certain things have to be taught first, before it becomes possible to teach other things. One cannot teach a child to add and subtract unless one has first taught him to count. In the same way, there are also certain foundational skills that a child must learn first, before it becomes possible for him to learn to read. Moreover, these foundational skills must be automatized. Unless these skills have been automatized, the child will be a poor reader/dyslexic.

fMRI studies have show dramatic changes in brain processing as automaticity develops, with more than 90% reductions in cortical activity as the skill is acquired. This happens because the brain can process information more quickly and with less effort.