Edublox Helped Send Learner on the Path to Lifelong Learning 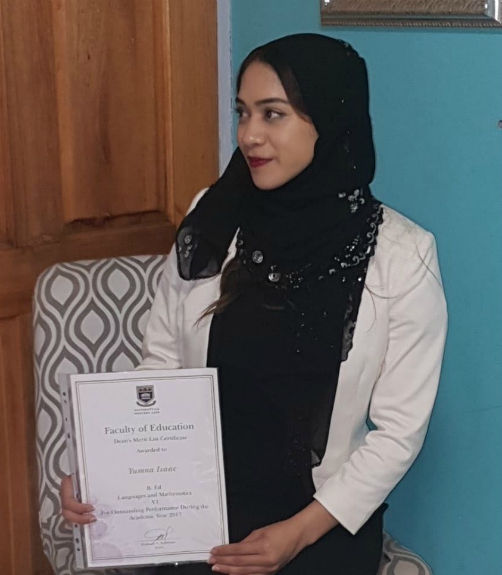 In 2016, Edublox shared the wonderful success story of Yumna Isaac, who failed Term 2 of Grade 11, but with the help of Edublox peaked in Matric and has now been awarded with the Dean’s Merit List Certificate for her outstanding performance during the academic year in 2017.

Yumna’s mother, Fairuz Isaac, enrolled her when she was failing Grade 11, and through Yumna’s hard work and support from Edublox, she eventually went on to peak in her academic career in matric with an average of 66%.

Fairuz described Yumna’s transformation: “From Day 1 when Yumna had the assessment until the last day, we knew we made the right decision. Yumna started off as a very quiet student with very little confidence. As the time progressed, Yumna’s school results didn’t increase drastically, but there was slight improvement and either a gradual increase in her marks or she was able to retain a previous mark. The Edublox assessment also showed ongoing progress. This was just the beginning, however, more importantly the transformation started to become very visible in 2015 – her Matric year. Her understanding and her study skills drastically improved. Her confidence levels started improving and Yumna started participating more in class at school and Edublox and everyone started noticing her. She even started going to class on time, whereas before I struggled to get her to go timeously.”

Matriculating with a drastically improved average was not the end of Yumna’s academic journey. She is currently studying towards a B.Ed degree at the University of Western Cape, and has been awarded with the Dean’s Merit List Certificate for her outstanding performance in Languages and Mathematics during the academic year in 2017.

It is an honour to see our past students on the path to lifelong learning!