Fact or Fiction? Dyslexia Is a Myth 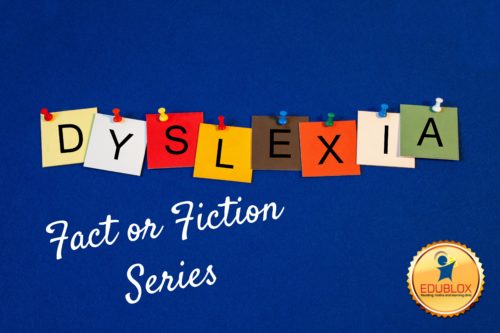 Imagine not being able to read. Your qualifications would most likely exclude a Matric certificate, seriously limiting your chances for academic and occupational success.

You could never apply for a job without assistance, being incapable of filling out an application form. You couldn’t read the instructions on medicine bottles and precautions on poisonous household chemicals, help your children with homework or treat them to bedtime stories, and correspond with family or friends. Choice, in all its facets, would be limited. Unable to read road signs and street names, you could not travel freely. In a restaurant you would be forced to order from the few dish photos instead of the full menu. At the voting station you might vote for a face, a smile or a style, rather than a mind or character or body of beliefs. At the very least, you’d be severely challenged and isolated in a reading world.

Although no academic skill is more vital than the ability to read, the reality is that many children battle to learn to read, and some never succeed. While there are many causes for reading failure, witnessing children who struggle to break the alphabetic code despite adequate intelligence, and what seems to be sufficient instruction, has been plaguing educators, psychologists and neuroscientists alike for more than a century. These children read slowly and haltingly, and words that they read correctly in one sentence may be misread in a subsequent sentence. Reading aloud may be particularly painful. Spelling may vary from being inconsistent to the bizarre. This phenomenon has been called many names, but most have now been discarded in favour of the terms dyslexia, reading disability and learning disability, with learning disabilities (LD) as the umbrella term for a variety of learning difficulties, including dyslexia.

Extreme viewpoints exist about dyslexia, which makes it difficult for parents to know how to best help their child. On the one side there is the group who believe dyslexia is a condition that cannot be cured but endured. The British Dyslexia Association (BDA) states that dyslexia “is likely to be present at birth and to be life-long in its effects.” The association and many others like it recommend taking a dyslexia test ― at a cost ― and provide advice about how to cope with dyslexia and gain access to the special study allowances and benefits available for diagnosed dyslexics.

On the other extreme there are those who say diagnoses of dyslexia are a complete waste of time — and even that dyslexia is a myth.

According to professor Julian Elliott from Durham University in the United Kingdom and professor Elena Grigorenko from Yale University in the United States of America diagnosis of dyslexia adds little value. In their book, The Dyslexia Debate, Elliott and Grigorenko write: “Parents are being misled by claims that such [dyslexia] assessments are scientifically rigorous, and that a diagnosis will point to more effective forms of treatment.” The authors raise concerns about the ever-increasing number of people who are diagnosed dyslexic. Dyslexia, according to them, is a term which, “confuses, rather than clarifies, and should be discontinued.”

Graham Stinger, British Member of Parliament, caused something of an international storm when he described dyslexia as “a cruel fiction… no more real than the 19th century scientific construction of ‘the æther’ to explain how light travels through a vacuum. The sooner it is consigned to the same dustbin of history, the better.” He argued that the reason why so many children struggled with literacy was because they had been failed by the education “establishment.” Rather than admitting that poor instruction was at fault, a brain disorder called dyslexia had been invented. For Stringer, “to label children as dyslexic because they’re confused by poor teaching methods is wicked.”

J. F. Miller, an educational psychologist and author of Do You Read Me? agrees. The biggest cause of reading difficulty, according to him, is unsystematic and unscientific teaching of reading. As a result, children are let down twice by the educational system: firstly, by not being properly taught and then pathologized with the “diagnosis” of dyslexia when they fail.

Maggie Snowling, professor of psychology at York University and a leading dyslexia expert, disagrees. “No one in the field of education would deny that there are myths surrounding dyslexia, but this does not mean that dyslexia is a myth. There is strong scientific evidence concerning the nature, causes and consequences of dyslexia. Some people find learning to read and write a trivial matter whereas others, notably children with dyslexia, have extreme difficulty,” she says.

While scholars continue to wrangle over the term dyslexia, reading failure continues to cast a long shadow. Children who struggle to read may be teased, humiliated and embarrassed, which may lead to truancy, demoralisation, psychosomatic pains and isolation. The impact of reading deficits, however, could be far more profuse. In the United States, three-fourths of those incarcerated have not graduated from high school and a staggering 70 percent are functionally illiterate and read below a fourth-grade level.

Bob Turney is a dyslexic who turned to crime because he thought he was thick. At primary school, he sat at the back of the class looking at picture books and did not have a clue what the teachers were talking about. When they said that he was stupid, he believed them; and when they treated him as disruptive, uncooperative and lazy, he behaved accordingly. He left school at fifteen, barely able to write his own name, got involved in his first burglary, and spent the next eighteen years in and out of prison.

For some the humiliation becomes too much. Peck found that over 50 percent of all suicides under age fifteen in Los Angeles County had been previously diagnosed as having learning disabilities. The actual percentage of youngsters labelled “learning disabled” in most school districts in the United States is below 5 percent; therefore, it seems clear that youngsters with learning disabilities constitute a disproportionately large percentage of adolescent suicides compared with the general adolescent population.

Since reading failure brings such devastation in the lives of so many people, no stone may be left unturned to eradicate reading disabilities. As Richardson states so succinctly, “Literacy gives us the keys to knowledge and wisdom — the keys to the Kingdom. Isn’t it time now for us all to put our heads together, to work together to see to it that those keys are given to every child?”

Miller, J.F. (2015). Do you read me? Learning difficulties, dyslexia, and the denial of meaning. London: Karnac Books.