14 Facts and Myths About Dyslexia 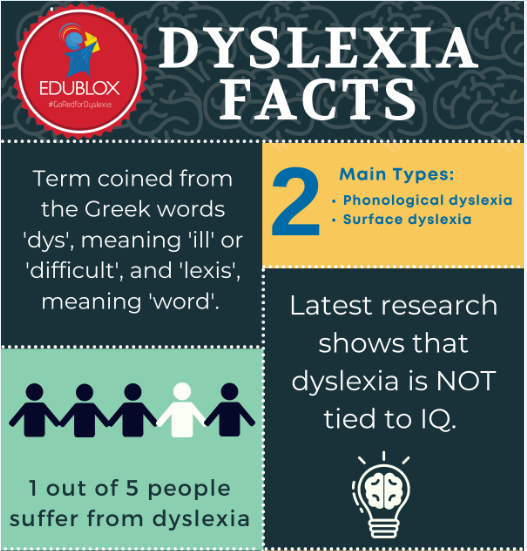 The term dyslexia is often used to describe a serious reading difficulty.

Over the years, the term has been given a variety of definitions, and for this reason, many teachers have resisted using the term at all. Instead, they have used such terms as “reading disability” or “learning disability” to describe conditions more correctly designated as dyslexia.

Although there is no universally recognised definition of dyslexia, the one presented by the World Federation of Neurology has won broad respect: “A disorder manifested by difficulty in learning to read despite conventional instruction, adequate intelligence, and sociocultural opportunity.”

While a lot of uncertainty continues to surround dyslexia, here are some facts:

1.) The term dyslexia was coined from the Greek words dys, meaning ill or difficult, and lexis, meaning word

The term refers to persons for whom reading is simply beyond their reach. Spelling and writing, due to their close relationship to reading, are usually included.

2.) Symptoms of dyslexia are many and varied

3.) Dyslexia is a common problem

According to a Yale study, 1 out of 5 people suffer from dyslexia, and 80 to 90 percent of children with learning disabilities are dyslexic.

The terms mild, moderate, and severe are commonly used to describe the degree:

5.) People with dyslexia do not see letters and words backwards

Reversals and mirror writing are the results of a processing deficit.

6.) There are two main types of dyslexia

University of Science and Technology in Trondheim gave two simulated driving tests to six dyslexic volunteers and 11 other people. They were shown road signs as they drove on simulated country and city roads at different speeds.

8.) Many dyslexics have trouble with sequencing 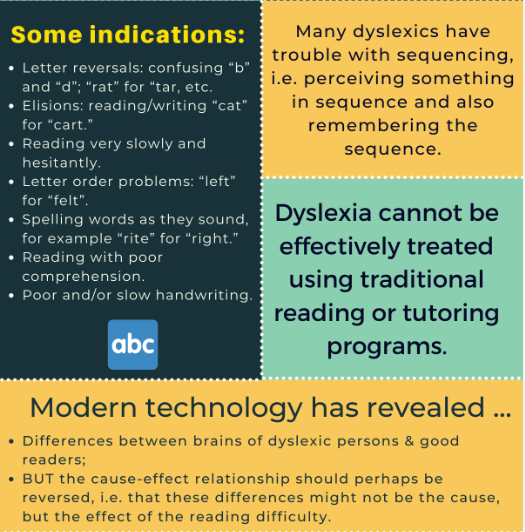 Sequencing refers to our ability to perceive something in sequence, and also to remember the sequence.

A study, published in the Journal of General Psychology, compared 33 dyslexic and 33 control eight- to twelve-year-old children and found the dyslexic children to be inferior to controls on tasks involving visual sequential memory and auditory sequential memory.

Ahissar and team tested dyslexic and non-dyslexic musicians on auditory processing and auditory memory. Dyslexic musicians scored as well as their non-dyslexic counterparts in auditory processing tasks, and better than the general population, but performed much worse on tests of auditory working memory, including memory for rhythm, melody, and speech sounds. Moreover, these abilities were intercorrelated, and highly correlated with their reading accuracy, which means that the dyslexic musicians with the poorest auditory working memory tended to have the lowest reading accuracy.

A study, published in Dyslexia, compared performances of 60 dyslexic children to that of 65 age-matched normal readers on verbal, visual-spatial, and visual-object tasks. Results documented a generalised impairment of long-term memory capacities in dyslexic children and the results did not vary as a function of children’s age.

11.) Latest research shows that dyslexia is not tied to IQ

Using brain imaging scans, neuroscientist John D. E. Gabrieli at the Massachusetts Institute of Technology has found that there was no difference between the way poor readers with or without dyslexia think while reading. Research results indicated that poor readers of all IQ levels showed significantly less brain activity in the six observed areas than typical readers. But there was no difference in the brains of the poor readers, regardless of their IQs.

12.) Study after study has shown that the dyslexic’s brain differs from the normal reader’s brain

One school of thought is that dyslexia is a condition that cannot be cured but endured, and on the other extreme some say diagnoses of dyslexia are a complete waste of time. Because the brain is plastic, Edublox’s point of view is that dyslexia is not a DISability, but an INability.

For many years people thought that the brain cannot change, let alone improve. People were told that when there was something wrong with a person’s brain, it could not be fixed. Scientists firmly believed that each person was born with a certain number of brain cells and if any of them were injured, there was no way to reverse the damage. Problems like dyslexia, which are linked to the brain, were therefore regarded as beyond cure.

New connections can form and the internal structure of the existing synapses can change. New neurons, also called nerve cells, are constantly being born, particularly in the learning and memory centres. Approximately 700 new neurons are daily being formed in each half of the brain. Neurons die each day too, keeping the overall number more or less balanced, with a slow loss of cells as we age. A person who becomes an expert in a specific domain will have growth in the areas of the brain that are involved with his/her particular skill.

14.) Cognitive training is probably the most effective treatment for dyslexia

Watch the video below: