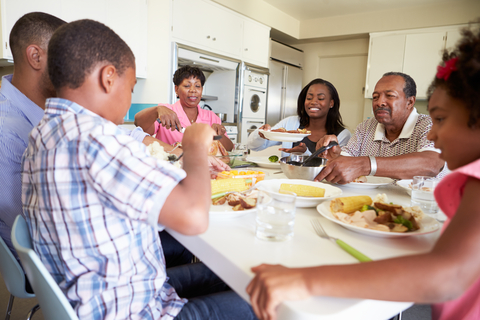 Family dinner time is an important part of the day. Not only is it a time to sit down and have a nutritious meal; it also provides family members with the opportunity to connect with each other as they talk about the events of the day.

For children and teens, this meal time ritual has numerous benefits, ranging from improved health to better outcomes at school. Discover five benefits of regular family dinners, and learn why you should make a family meal part of your daily routine.

In 2011, a study in Pediatrics found that children and teens who had family meals at least three times per week were more likely to be at a healthy weight and to have healthy diets than were those who had family meals fewer than three times per week. Children whose families eat dinner together six to seven days per week also have higher quality diets than children whose families eat dinner together less often, according to research in a 2010 edition of the European Journal of Clinical Nutrition.

A 2006 study in the Journal of Adolescent Health found that more frequent family dinners were associated with less substance abuse, sexual activity, violence, and antisocial behaviour among children in grades 6 through 12. This association remained significant, even after family factors and demographics were taken into account.

Engaging in regular family meals could improve children’s performance at school. As the authors of a 2006 report in New Directions for Child and Adolescent Development have explained, conversations during family meals help children to learn new words and practise storytelling. This could certainly help children perform better at school.

In addition, a 2004 study in JAMA Pediatrics found that adolescents who ate family meals more often were less likely to have low grade point averages. Finally, children aged 6 to 11 who have more family meals are more engaged in school, according to a 2014 study in the Journal of Family Psychology.

Regular family dinners may improve your child’s mental health functioning. More frequent family dinners are associated with better emotional well-being and higher life satisfaction, according to researchers for a 2013 edition of the Journal of Adolescent Health.

A second study, included in a 2014 edition of Advances in Mental Health, found that family meals were associated with happiness among adolescents.

In addition to the numerous other benefits, regular family meals can improve overall family functioning. According to a 2010 study in the Journal of Family Psychology, urban adolescents who eat family dinners more often feel that they have better communication with their parents.

Family dinners can also improve family functioning through increased bonding. More family meals are associated with greater family cohesion over time, according to researchers for a 2008 edition of Health Psychology.

Improved family functioning is just one of several benefits associated with regular family dinners. As discussed here, children and teens who have regular family dinners enjoy a variety of benefits, including better physical and mental health, improved school performance, and fewer problem behaviours. Take the time to sit down and have an evening meal with your family; the effort will be well worth the rewards.