A Letter We’ve Seen Millions of Times, Yet Can’t Write 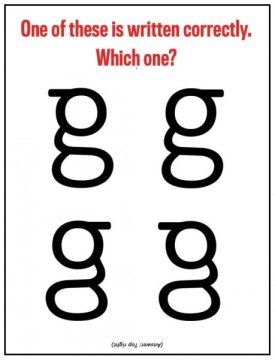 Despite seeing it millions of times in pretty much every picture book, every novel, every newspaper and every email message, people are essentially unaware of the more common version of the lowercase print letter “g,” Johns Hopkins researchers have found.

Most people don’t even know that two forms of the letter — one usually handwritten, the other typeset — exist. And if they do, they can’t write the typeset one we usually see. They can’t even pick the correct version of it out of a lineup.

The findings, which suggest the importance writing plays in learning letters, appeared in the Journal of Experimental Psychology: Human Perception & Performance.

“We think that if we look at something enough, especially if we have to pay attention to its shape as we do during reading, then we would know what it looks like, but our results suggest that’s not always the case,” said Johns Hopkins cognitive scientist Michael McCloskey, the senior author. “What we think may be happening here is that we learn the shapes of most letters in part because we have to write them in school. ‘Looptail g’ is something we’re never taught to write, so we may not learn its shape as well.”

Unlike most letters, “g” has two lowercase print versions. There’s the opentail one that most everyone uses when writing by hand; it looks like a loop with a fishhook hanging from it. Then there’s the looptail g, which is by far the more common, seen in everyday fonts like Times New Roman and Calibri and, hence, in most printed and typed material.

“We would say: ‘There’re two forms of g. Can you write them?’ And people would look at us and just stare for a moment, because they had no idea,” said first author Kimberly Wong, a junior undergraduate at Johns Hopkins. “Once you really nudged them on, insisting there are two types of g, some would still insist there is no second g.”

Next, the researchers asked 16 new participants to silently read a paragraph filled with looptail gs, but to say each word with a “g” aloud. Immediately after participants finished, having paid particular attention to each of 14 gs, they were asked to write the “g” that they just saw 14 times. Half of them wrote the wrong type, the opentail. The others attempted to write a looptail version, but only one could.

Finally, the team asked 25 participants to identify the correct looptail g in a multiple-choice test with four options.

“They don’t entirely know what this letter looks like, even though they can read it,” said co-author Gali Ellenblum, a graduate student in cognitive science. “This is not true of letters in general. What’s going on here?”

This outlier “g” seems to demonstrate that our knowledge of letters can suffer when we don’t write them. And as we write less and become more dependent on electronic devices, the researchers wonder about the implications for reading.

“What about children who are just learning to read? Do they have a little bit more trouble with this form of g because they haven’t been forced to pay attention to it and write it?” McCloskey said. “That’s something we don’t really know. Our findings give us an intriguing way of looking at questions about the importance of writing for reading. Here is a naturally occurring situation where, unlike most letters, this is a letter we don’t write. We could ask whether children have some reading disadvantage with this form of g.”