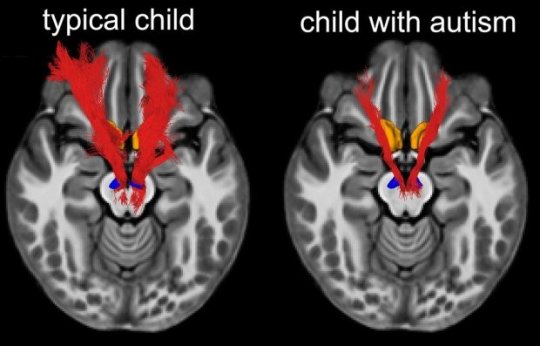 Children with autism have structural and functional abnormalities in the brain circuit that normally makes social interaction feel rewarding, according to a new study from the Stanford University School of Medicine.

The findings help clarify which of several competing theories best explains the social impairments seen in children with autism. The discoveries, made via MRI brain scans, support the social motivation theory of autism, which proposes that social interaction is inherently less appealing to people who have the disorder.

“It’s the first time we have had concrete brain evidence to support this theory,” said the study’s lead author, Kaustubh Supekar, PhD, a research scientist at Stanford’s Translational Neurosciences Incubator. Disrupting the mesolimbic reward pathway in mice reduces their social behaviour, prior research has shown, but no one knew how closely the pathway was tied to social skills in people. “This is the first neurobiological evidence in children that this mechanism might explain their social impairments,” Supekar said.

“Human social cognition is complex,” said the study’s senior author, Vinod Menon, PhD, professor of psychiatry and behavioural sciences. “We were surprised we could trace deficits in social skills to a very simple, almost primordial circuit.”

The brain difference could launch a vicious cycle that makes it hard for children with autism to acquire complex social skills, according to the researchers.

“Social interaction is usually inherently rewarding. If it’s not rewarding enough to a child with autism, that could have cascading effects on other brain systems,” said Menon, who is the Rachael L. and Walter F. Nichols, MD, Professor. In order to develop social-communication skills and the ability to infer others’ thoughts and feelings, children must interact with other people. If they don’t find those interactions rewarding, they seek fewer opportunities to develop complex social skills, he said. “Our findings suggest that this is a brain system that should be targeted early in clinical treatments,” he added.

Children with autism have difficulty with social interaction and communication, and show repetitive behaviours and restricted interests. The Centers for Disease Control and Prevention estimates the developmental disorder affects 1 in 59 children.

The team also conducted MRI scans of brain wiring on an additional 17 children with the disorder and 17 children without it to see if the results from the first groups could be replicated in a second, independent cohort. All of the children studied were 8-13 years old. Children with autism had their diagnosis confirmed by standard clinical testing for the disorder, and all children had their IQ tested.

The density of nerve-fibre tracts in the mesolimbic reward pathway was lower in children with autism than in those without; there were no differences between the children with and without autism when researchers examined an emotion-related brain pathway as a control. Among the children who had autism, lower density of nerve-fibre tracts was linked to greater social impairment on a standard clinical evaluation of their social skills. The results were the same in the second, independent cohort of children the team studied. Children with autism also had weaker functional connections in the mesolimbic reward pathway than did typically developing children. The degree of functional deficit was also correlated to social impairment.

Findings could aid search for treatments

The research provides a useful link between prior work in animal models of autism and human data, the researchers said, and is especially strong because the findings were replicated in two groups of research participants. Next, the researchers want to determine whether the same brain deficits can be detected in younger children with autism.

The discovery also provides a good starting point for future studies of autism treatments. Some existing, effective autism therapies use various rewards to help children engage in social interaction, but it is not known if those treatments strengthen the brain’s social reward circuits.

“It would be exciting to conduct a clinical intervention study to determine whether the structural and functional integrity of this pathway can be altered through a reward-based learning paradigm,” Menon said.