Mila Blossoms and Comes Into Her Own Self 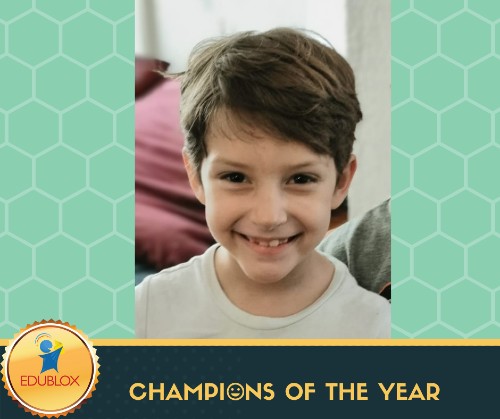 Mila is 9 years old now. Life has been a bit trickier for her than other children. It is hard for a parent to see how your child is being consumed by fear, sadness and self-doubt. Children know and feel when they are different. In this day and age we still have the stereotype of being an outcast if you are different in any way or form.

Mila sees the world much different from most of her peers. That is also one of the many reasons why she did not have any friends in her one and a half years of mainstream school. She is an old soul with an above average creative flair. That does not mean that she can’t also dabble in the everyday normalities of life. She only needs to be given a fair chance.

As parents, we supported Mila in her being her and in researching ways to help her find her way. She attended speech therapy in pre-school, Grade RR, Grade R, Grade 1 and Grade 2. She also attended extra workshops for extra learning and development. She was diagnosed with Auditory Processing Disorder in Grade R. We did advise the school (PNPS) upon enrolling her. The school is familiar for their support systems and inclusive status.

Mila was eager to learn at first but found it difficult in PNPS. It was a very difficult year for her. She struggled to find her way. The noise and high level of disruption in the classrooms made hearing and understanding instructions very difficult. Because Mila could not block the noise out, she fell more behind in everyday work. With this Mila started to lack self-confidence and did not want to attend school.

I attended a facilitator course in order for me as a parent to offer more support to her at home. I had the opportunity to work in the same environment as she was attending school. Unfortunately, the course did not provide as many resources as one would expect. Mila was going to Grade 2 with the condition to have a facilitator to assist her.

Grade 2 started with a bang. I worked with her every day after school and I noticed a few things. The facilitator stated that Mila is doing so well and we must not worry because there are lots of kids not being able to read. Every time we approached Mila’s progress the facilitator just though we were overreacting. Mila was in Grade 2 and could not read. She did not want to read. She did not want to do anything but draw. She was scared of school. She was reserved and always on the edge. She even pointed out some areas of the school grounds where she could escape from. She cried most nights. She kept saying that she is stupid. Her demeanor was starting to become darker. Self-hate. As parents we realised that whatever was happening at school was not working. It somehow was making it all worse. Mila was falling more behind and now her emotional wellbeing was being compromised. My husband and I decided to make an appointment at an educational physiologist, and we saw this as the last option of so many options we had tried. We made an appointment but would only be able to see Abigail Simpson after a month. This was in Grade 2 almost at the end of Term 2.

Mila met with Abigail. It all went well. We went for a follow-up with Abigail two weeks later. She diagnosed Mila with Dyslexia, Social Pragmatic Disorder and Working Memory Issues. She did confirm Auditory Processing Disorder.

We discussed going forward. Mila had to leave her school for sure. She started Grade 2 six months behind and ended up 12 months behind in the middle of Grade 2. This is shocking. I felt that I could scream and felt like a failure as a parent. I was so frustrated with our journey and the support systems we trusted but soon realised that this is not happening to me, but to my child. How is this all affecting her? We had to make a big change. And soon.

Abigail stated that she had learned of Edublox through a client. I also heard and read up on Edublox on a couple occasions. I decided that day to phone Edublox. Zainu and I met up a few days later. I was very despondent and did not expect anything positive coming for it. Self-doubt and the darkness were also consuming me. However. Mila and I went to meet with Zainu. At least I could say I tried.

Upon arrival they welcomed Mila and took her into the class to see the set-up and meet the teacher and pupils. They also tested Mila and noted a few things which were so mind-blowing and eye-opening to me. I loved their outlook on how to approach the “issue” at hand: that we take step by step but focus on the main issue. They, in other words, would not focus on the symptoms but focus on the cause. This is truly genius.

Zainu stated that they had an opening, should we be interested. On our way out of the gate Mila jumped up and down and said she wanted to come back to this place. And like that, Mila started Term 3 in the Edublox EASY programme. She is re-doing Grade 2 this year. It is so important to get the foundation right at this stage of her education.

Mila has come into her own self. She has blossomed into a beautiful, self-confident, strong young individual. She handles confrontation with an open mind and mature outlook.

She went from a child who could not read or struggled to read a Cat in a Hat Level 1 book to a child who is now reading her 5th The Wimpy Kid book. She does not feel stupid anymore like she did before. Kids and grown-ups can be so cruel. She cried before, always thinking that she is not good enough, not clever enough, comparing her to others and others comparing them to her. Now she is beaming with self-confidence to read chapters of her books to her friend. Her friend was also struggling to read but Mila has inspired her friend and now he is also reading The Wimpy Kid.

People do not realise how important self-confidence is for kids in the foundation phase. We tend to compare children and discuss them in front of them. Kids are not stupid or blind. They can feel that they are different. They know that something is not right. Mila was not given a fair chance to reach her full potential in her previous school environment.

Mila’s favourite subject now is Maths. If you had asked me a year ago what subject was her favourite I would never thought that Maths would be an option. Because of the support she receives from the teachers and principal at Edublox, Mila is now asking for more Maths homework. She wants school to be 7 days a week. She has a great sense of humour and she loves her school friends.

Because Mila has been given the platform to discover who she is, strengthen her abilities and improving her skills Mila is now on a journey of self-discovery and adventure.

I cannot express my feeling of gratitude and relief to see my child beaming with pride. Wanting to do homework. Wanting to learn. Being a leader and not hiding in the shadows.

Progress despite the lockdown in 2020

The lockdown caused such havoc. Nobody knew what to expect and where this all would end. How would we all cope? However, Mila was very upset that she could not attend class anymore. We worked through the workbooks we had at home. We also collected her books from class and did the assignments emailed to us. The first few weeks were the most difficult part. Mila missed her teacher and friends.

Edublox quickly worked on solutions going forward. Thank goodness for Zoom. Edublox immediately seized the moment. Zoom classes started and Mila loved all of it. She loved being able to see her Mam and her friends. The interaction brought some stability in the “new normal”. Mila still enjoyed school even if it was via Zoom.

She immediately did her homework after class or even during class. She had the same dedication to her schoolwork during the Zoom classes than what she did during physical classes. I am very proud that Mila had the emotional maturity to keep going strong. It was also during this time that she found the adventures in The Wimpy Kid book. She is now on her 5th book. She did not let the Zoom classes bring her down. She still tackled school with the same dedication as before. She did start to miss her Mam and her friends after a few months. Who would not? She was also glad when the physical classes started again.