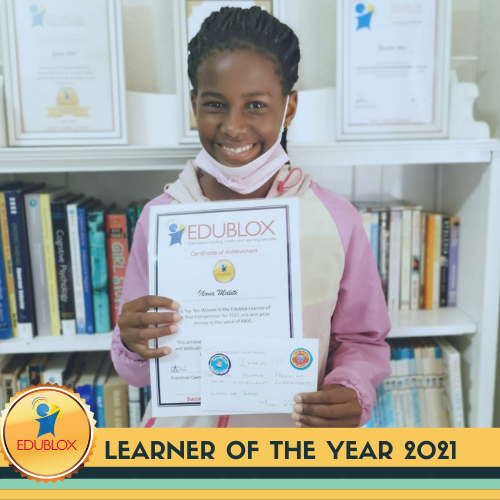 What was Ikona struggling with before she was enrolled at Edublox?

Why did you decide to enrol Ikona at Edublox?

In what respects have you noticed improvement?

A good relationship was built with her teachers, such that she freely speaks about them on a daily basis. She even aspires to their likes, e.g. pizza and doughnuts. As a parent, I realised how much she adores her teachers and such relationship has been transferred into her relating more and better with other students. On our daily driving from school, she now freely provides me with feedback from daily school activities, homework and messages from her tutors. Regardless of written messages she confidently, eloquently, efficiently, and fluently relays messages and how she engaged with other students. Such congruence has resulted in the improvement of her academics and willingness to freely participate and contribute more on the directives related to her homework and practical activities. An addendum to that is shown through inferences drawn from her academic and practicals/recreation videos.

Why would you recommend Edublox to other parents?

It is with profound effect that I, Ray Sizwe, the father of Iko, can attest on behalf of my daughter. Iko is a very vibrant extrovert and possesses an open-minded and outgoing character, although she tends to hold back in the beginning. An addendum to that lies within the ambit of her communication or rather a positive engagement with her Edublox teachers. From that, one would agree that as she got along, she was able to build a relationship of trust. She aspires to her teachers and sees them as her role models. Every day when I fetch her from school, she has a story to tell about her engagement with her teachers, as well her peers. She even follows her teacher’s eating habits because she sees herself operating at their level one day.

Academically, Iko has special needs, wherein in her learning and becoming she realised that it is of utmost importance for her to be at school on a daily basis, even if the odds are against that at times. She is always enthusiastic to do her homework. As a cautious parent I gave her a notebook for her teachers to write any messages of communication. I have noticed that Iko is able to verbally relay messages and instructions from her teachers without even me referring to the book. Such endeavour has invoked in me a sense that in bridging the gap on her shortcomings, Iko learns better by association and interaction. Her limitations academically were also influenced by other outside factors, I think.

For her lower grade school, we enrolled her at an institution where there were at least 34 kids in her classroom. Such traffic congestion affected her confidence and frustrated her especially when it was time to go to school. She felt ignored and was academically challenged and that stress had an impact in her grades. Her previous teachers tried more than their best to accommodate and motivate her. We observed that things were not getting anywhere nearer to good and had to immediately conjure something.

Nomntu, (Iko’s mother) is a Googling guru, she speedily checked for other options, and boom! There she got captivated by EDUBLOX. After weighing the options, it didn’t take us long to agree that Edublox is a much better place for her. The sooner we engaged with, we received some happy returns and warm regards, the rest is history. Enrolment with Edublox brought us some happy returns, for as Iko was engaging with other pupils we noticed that she doesn’t only speak about others at school but was enthused by their qualities and presentation of themselves. For example:

Such undertaking resulted in Iko engaging more in sport, football to be precise. Last year she caught the eye of the Brazilian Academy coaches in Goodwood. Sadly, the football academy was closed in July last year. Iko has since joined Tramways Football Academy.

Iko’s engagement with others and in sport had some positive results in that it helped to improve her grades at school as well socialising. Shades of the ENGLISH writer who coined the phrase, “A healthy mind in the healthy body”. 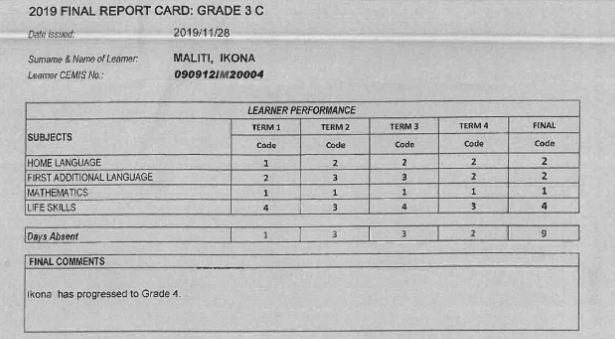