Our son enrolled at Edublox for the 2021 academic year, following an assessment in December 2020, during which it was determined that he was experiencing some developmental lags in terms of reading speed, comprehension, mathematics and Afrikaans, coupled with an incapacity to regulate his emotions appropriately.

Since both I and my partner, as Mckenzie’s parents, have excelled academically and have also been involved in teaching, learning, higher education and academic environments, it was concerning that some of these areas were not identified earlier so that we could have sought the necessary developmental interventions in order to effect the desired changes.

The onset of COVID and the concomitant online environment and altered way of learning appeared to exacerbate his delays in grasping some of the critical foundational phase concepts. Assessments at Edublox Durbanville, revealed that a lot of his learning was sporadic, was based on him guessing, and helped highlight comprehension, spelling and phonetic issues that were not identified in mainstream schooling.

Initially this was quite concerning, but in retrospect, having spoken to, engaged with, understood the philosophy behind the EASY (Edublox Academic Support Years) approach, and met some of the educators and support staff at Edublox, we realised that Mckenzie was in the right environment to provide him with holistic support to ensure that not only his language, mathematics, psychosocial and emotional needs were receiving appropriate care through EQ training to build self-awareness, self-insight and confidence, demonstrate empathy, manage impulses, understand emotional challenges, identify potentially useful interventions in order to facilitate decision-making skills, all of which have assisted him in developing into someone who now enjoys school more, interacts more with other children and is able to build relationships and be more inquiring.

Why did you decide to enrol Mckenzie at Edublox specifically?

Mainstream education seemed to be failing our child and we were becoming increasingly concerned that he would become a statistic (a child who shows potential, but due to not receiving appropriate remedial intervention, may struggle later on).

Having spent his formative years in private schooling with up to 20 learners per class, it was likely that his developmental lags may have been overlooked. Of particular concern was that he received 5’s in certain subject areas in which he could not demonstrate any competence when probed at home. Coming from a private school in Grade 1, his report card reflected a 5 for Afrikaans, but we as parents, knew that this was more likely a 1 or 2. When Mckenzie came home after the first day at Edublox, he proudly uttered, “My naam is Mckenzie en ek is sewe jaar oud”, I nearly fell off my chair. ONE DAY at Edublox and he was able to say this. And an entire year in Grade 1 he could not identify the simplest words.

Meeting the principal, then his teacher and all the wonderful support staff, it was evident that their primary concern was not only the academic success for ALL children whose lives they touch, but their social and emotional well-being and offering a network of support for parents to help allay any anxiety about our child.

I have been in awe of my child that entered the school hating learning, reading (while knowing him to be very inquisitive), that was blossoming from the fledgling into a completely different version of himself. The love, care, lessons, learning and teaching (but also firm approach) have benefitted our son and have reinforced my belief that this school, its philosophy, but more specifically the teachers and their tremendous dedication and patience, and genuine concern to provide the best environment conducive for teaching and learning.

In what respects have you noticed improvement?

Reading speed and comprehension have improved exponentially, as well as Mckenzie’s confidence (still a work in progress). He now reads more fluently, and has read several books this year which were near impossible for him to read previously.

His vocabulary has always been extensive, but he has learnt synonyms and antonyms, and he continues to surprise us with the spontaneous questions that he poses, most of which are difficult to answer.

Understanding of mathematics concepts: this has also grown in leaps and bounds. Initially, addition and subtraction were the same concepts, but through patience on his teacher’s part, a lot of repetition, and support at home, he has been able to embed some of the concepts, a lot more comfortably.

In what areas are Mckenzie still experiencing difficulties?

Emotionally, our son has undergone a 180-degree transformation. He does not act as impulsively as he previously did, he is able to regulate his emotions better, apologise when he is in the wrong and generally makes better decisions. Although this is still a work in progress, it is pleasing to see that this adjustment is being navigated more confidently. The EQ programme which Edublox encourages learners to participate in, is a wonderful and welcomed initiative that is beneficial to the learners, their parents, the teachers and the ecosystem that supports their education.

Why would you recommend Edublox to other parents?

The Fourth Industrial Revolution (4IR) and its concomitant requirements of organisations, including schools, necessitates an understanding of how to navigate this dynamic, volatile, uncertain, complex, and ambiguous (VUCA) milieu. Against the backdrop of the COVID-pandemic, and given the multitude of challenges this has presented in the education sector, it is likely that many learners have been adversely impacted due to inadequate support. The Edublox programme offers an integrated, holistic, bespoke and focused effort that is not intended to be applied in a blanket fashion, but takes cognisance of a range of psychosocial, educational, emotional, personal factors impinging on a child’s education, but also encourages parents to recognise that a child’s learning style, home and academic environment should be set up to offer a child the best circumstances in which they can become self-actualised, fully functioning, independent and successful young members of their ecosystems. The dedication, professionalism demonstrated by the teachers and staff, and their love for education is unsurpassed. Edublox represents part of our family’s village that the adage suggests it takes to raise a child. We know our child is loved for who is, is not expected to assimilate, but retains his identity and allows him to flourish and evolve into the best version of himself that was intended. We are grateful to the teachers, their time, effort, tenacity, patience, resilience and his development. Edublox, we believe, is the environment we would encourage you to consider for your child. Having started on the back foot in many areas, and feeling disillusioned where to turn to during our times of despair, we are blessed to be a part of this amazing school. Thank you to all those that have been involved in helping us to feel respected, heard, validated and included. 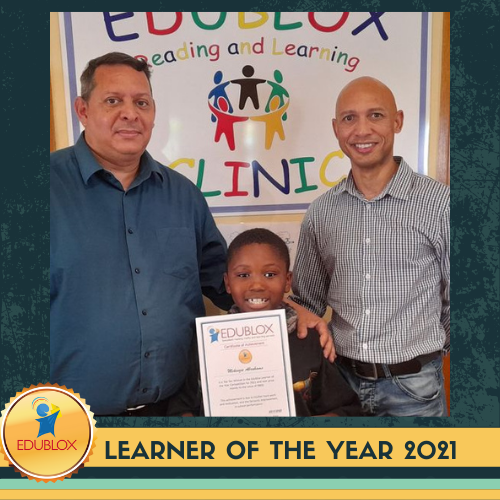