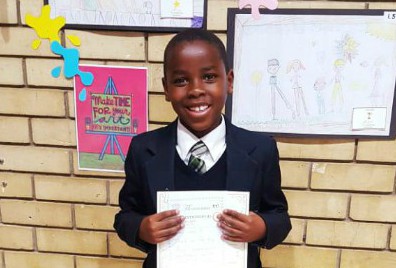 Makalondwe enrolled for grade 1 at Norkem Park Primary School in 2016 at age 7.

In Grade 1, he experienced tremendous difficulties with his schoolwork, to such an extent that he failed and had to repeat the grade. After receiving this disappointing result at the end of the fourth term, we decided to set up an appointment with an educational psychologist, so that she could assess the root cause of his poor work performance.

From the test results, it was noted that there was an extremely poor mismatch between his age and the level of his general knowledge. This was due to his lack of concentration and his poor understanding of the English language. Her recommendation was that we contact a speech therapist to mentor and coach Makalondwe.

In 2017, Makalondwe repeated Grade 1 and he also started attending speech therapy sessions once a week for 45 minutes for 7 months. The therapist gave him exercises to repeatedly do every day for the entire week. His school results improved noticeably. At the end of the fourth term, he was awarded a Certificate of Merit for progress in all subjects.

In Grade 2 term 1, his performance level was, on average, 5,75 (meritorious achievement). At the end of that term, we decided to enrol him for Grade 3 for the following year at Curro Serengeti. He was invited to undertake an assessment test just before the end of term 1, and to our surprise, he failed his test dismally. They advised us to enrol him at Edublox.

At the beginning of term 2, Makalondwe started to attend Edublox classes. His average performance level remained the same for term 2 as compared to term 1. In term 3, his performance level dramatically improved to an average of 6.75 (outstanding achievement). His reading skills, vocabulary and sentence formation improved exponentially. His spelling, mathematics and Afrikaans also improved tremendously.

After reading a book, he is now able to expressly articulate the story quite well and that’s how we validate his understanding. He is able to start and finish his homework independently without anybody’s guidance. It has also been noted that he is now able to do his mathematics without using a number chart for guidance.

For the second time in a row, Makalondwe was nominated to receive a Certificate of Merit at Norkem Park Primary School on 3 December 2018. 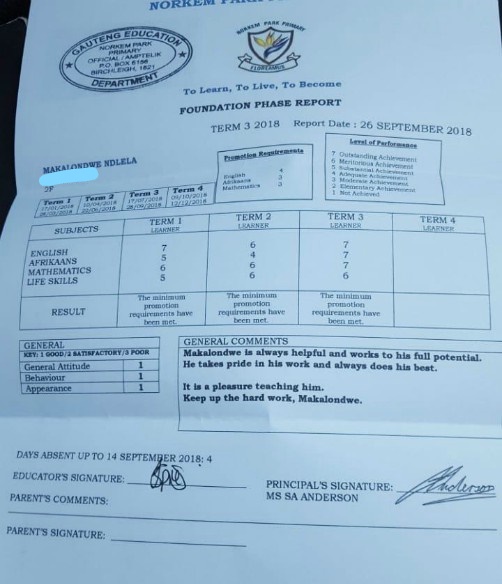