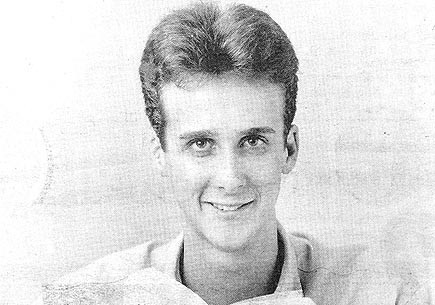 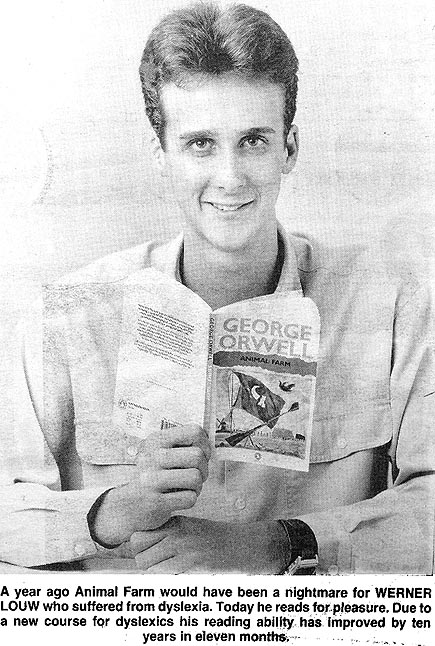 The article below was published in The Citizen on 24 April 1991:

IMAGINE not being able to read. Your academic career would not venture further than high school, seriously hampering your chances of ever working your way up in the world. You could never apply for a job without assistance, being incapable of filling in an application form. You couldn’t write to friends, read for pleasure or simply read road signs and maps on long journeys. In essence, you would be severely disabled in a reading world.

For 750 000 South Africans this is a reality, with statistics indicating that 15 percent of the White population suffer from dyslexia or poor reading skills.

“This means in a class of 30 pupils, four to five will never read efficiently. If we include the rest of the population, the figures will probably be even higher, probably close on 24 percent ― the present statistics in the United States,” says an educationalist from Pretoria, Dr Jan Strydom.

With the cause of dyslexia still unknown, it’s questionable whether we will ever be able to eradicate it’s debilitating symptoms completely, but there’s no doubt progress is being made. Dr Strydom believes he has the answer after fourteen years of intensive research in dyslexia: “A year ago I designed a course specifically for solving reading and spelling problems. The results speak for themselves.”

A Pretoria schoolboy who suffered from dyslexia all his life, has rid himself completely of his problem within eleven months, improving his reading ability from a Standard Two level to a level equal to matric plus two years.

A remarkable feat which has given seventeen-year old Werner Louw a new lease on life: “It wasn’t easy, I struggled to begin with but after lots of patience and diligence – I sat down for at least half-hour every evening to work ― I succeeded in mastering the various skills.”

Apart from learning to read, Werner admits to feeling a lot more confident. “I enjoy reading now,” he says, showing me his prescribed book Animal Farm. “It’s great to be able to know if I do well at school, I could go to university. Not long ago, this was out of the question.”

After attending a school for dyslexic children for three years and repeating Standard One twice, his mother, Nellie, was distraught: “I didn’t know what to do. My husband and I spent a fortune going from one occupational therapist to the next. Apart from the initial outlay of R850 for the cassettes and books, this course has cost us no more. And, just look at the results, it’s wonderful. I can’t believe it.”

The theory behind Dr Strydom’s course is complicated, too intensive to explain in this article, but basically it’s supported by two main principles: “No human being can do anything he has not learned to do; and learning in itself is a stratified process, which means that one has to master a skill first to enable one to master consequent skills.”

Defined in a more practical way, he points to a typical example: “To teach a child to add and subtract, you first have to teach him to count. If not, it will be impossible to teach him a few basic mathematical principles.”

In the same vein, parents run round in circles trying to teach their dyslexic offspring to read, spending thousands of rands on remedial education and occupational therapy, he says, “When to start with, certain skills have to be mastered before they can even begin to learn to read.”

The sad fact with many of these children who struggle to grasp basic reading skills, is that instead of trying to overcome this inability they are promptly labelled with other conditions, some as severe as mentally retardation, and left to struggle the rest of their lives. “There’s nothing wrong with their brains. They just haven’t grasped a skill.”

His success rate to date? “It’s a 100 percent if the parent is willing to work with the child.” At the same time, though, Dr Strydom doesn’t like talking in percentages: “I’m interested in the individual, not the percentages. If one child has been helped, I’m happy.”

For parents who might be worried that their child is suffering from dyslexia, the symptoms to look for are obvious. “If he reverses letters, b and d for instance, reverses words such as now and won or generally struggles to read.”

But, apart from the mental disabilities, the mental anguish which each parent feels is phenomenal: “I didn’t know what to do, which way to turn. Nothing we did seem to help his problem. Yes, certainly, I embarked on Dr Strydom’s course with trepidation. We had tried so much beforehand.

“But it worked. When he went to be tested in January this year, I cried. He had improved beyond my wildest dreams. It was fantastic.”