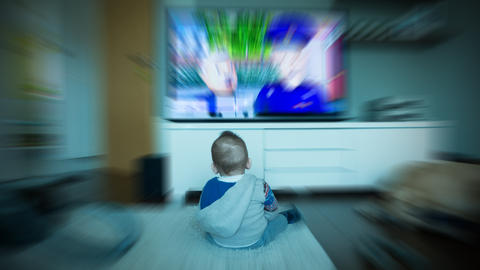 TV is a fundamental part of many children’s lives – many kids are glued to the TV for hours every day. Add the time they spend staring at DVDs, computers and video games and the screen time really mounts up. Does this do any damage, or is it a harmless way for kids to pass the time?

According to the latest research watching TV can be harmful, especially for children under three. That’s because the brains of very young children are like lumps of clay, growing and changing in response to what they experience.

Early television exposure in children ages 1-3 is associated with attention problems at age seven, according to a study from Children’s Hospital and Regional Medical Center in Seattle published in Pediatrics. The study revealed that each hour of television watched per day at ages 1-3 increases the risk of attention problems, such as ADHD, by almost 10 percent at age seven. The study controls for other attributes of the home environment including cognitive stimulation and emotional support.

The findings also suggest that preventive action can be taken to minimise the risk of attention problems in children. Limiting young children’s exposure to television during the formative years of brain development may reduce a child’s subsequent risk of developing ADHD.

The study, led by Dimitri Christakis, MD, MPH, a paediatric researcher at Children’s Hospital and Regional Medical Center in Seattle, did not look at the content of the television programmes.

“This study suggests that there is a significant and important association between early exposure to television and subsequent attentional problems,” said Christakis, who is also director of the Child Health Institute and an associate professor at the University of Washington School of Medicine. “We know from national estimates that children watch an average of 2-3 hours of television a day in the 1-3 year old age group and that as many as 30 percent of all children have a television in their bedroom. There is a tremendous and growing reliance on television for a variety of reasons. However, parents should be advised to limit their young child’s television viewing.”

This study adds inattention to the list of harmful consequences of excessive television viewing that also includes obesity and violent behaviour. Children ages 1-3 were chosen to participate because their brains are still developing rapidly, and symptoms of attentional problems, such as ADHD, do not typically manifest in children until later years.